We are all living in a time of uncertainty for trading. It is no surprise that the millions of workers that are not able to make an income is causing uproar in the world of finance. That uncertainty has lead people to ask many questions about the future of stocks and cryptocurrency, trying to work out, which is best to invest in. That naturally leads to the question: Stocks Vs. Cryptocurrency, are either of them worth the money at the moment, and, if so, which?

Stocks Vs. Cryptocurrency Before The Pandemic

Before the pandemic, things seemed as stable as they could. It is agreeable that any type of stocks or crypto is not exactly stable, or 100% predictable. However, they were as predictable as possible. In the next sections, we will take a look through the Dow Jones Industrial Average and Bitcoin as the two leading standards in their respective areas. Stocks Vs. Cryptocurrency has always been a debate; let’s see what the data says.

Stocks – Pre and During Pandemic

From April 2019, the Dow Jones Industrial Average has remained at an average of 27,000. The price did fluctuate between 24,819 on the 3rd of June and 28,462 on the 30th of December 2019. Because the pandemic didn’t hit the world economy instantly, the index still grew by 1,089 points until the 12th of February. There seemed to be no considerable impact in Coronavirus growth throughout the USA on this date; in fact, the CDC confirmed only the 15th US case, who was an evacuee from Wuhan.

That patient was not the first to travel to the US from Wuhan, so, there was no significant change. However, 29,551, on the 12th of February 2020, is the highest it has ever been. But, that was the end of the growth – for now.

Although the image above shows the 14th, the peak was on the 12th. But, with the scale of the graph above, it does not show the 12th, so, see below.

Since then, the Dow Index dropped at the fastest rate it ever has, to a low, on the 23rd of March 2020, that has not been seen since the beginning of December 2016.

After the massive dip on the 23rd of March, it has started to rise again, although as sporadically as usual.  While it now stands at a rate similar to that of mid-October 2017, the question remains; will it continue to rise, and maybe even surpass the peak seen in February this year? We will look further into the possible future of the Dow Index a little later in the article.

Cryptocurrency – Pre and During Pandemic

Now let’s take a similar look into the world of cryptocurrency. Again, we will use the largest of the pack to identify any trends, Bitcoin. The first thing that we will do is give BTC the same starting point as the DJI. So, here are the last five years:

While I am not trying to teach people how to suck eggs, the first thing that you notice is that BTC fluctuates a considerable amount more than the DJI. Secondly, as you probably already know, the peak price of Bitcoin was on the11th of December 2017.

If we want to make a direct comparison between the two, we need to now look at the price of BTC on the peak day of the DJI. Strangely, or not, depending on your view of stock prices affecting crypto, the 14th of February saw a peak in BTC, only two days after that of the DJI. However, as you have seen, the maximum is over a much shorter period, as September 2019 saw a higher price.

However, what happened after the 14th of February is very similar to the DJI, just over a shorter period. It took the DJI five weeks and five days to hit the lowest point, whereas BTC took only three weeks and six days. On the 11th of March, the World Health Organization declared the COVID-19 a pandemic, and that hit Bitcoin where it hurts. In only twenty minutes, the average price of BTC dropped by 15%.

That shows that Bitcoin is a much more volatile market than the Dow Jones Index. However, before we make any assumptions about which is better to invest in, we need to look at the data after the fateful day of the 12th of March.

March 2020 – The End of Stocks Vs. Cryptocurrency?

The simple answer to that question is no, not quite. However, it is undoubtedly a month where a lot of questions began. We are only one month past the most significant dips seen in both sectors for a while now, so it may be too soon to make accurate decisions. However, all we can do is look at the data that we have:

As you can see from the simple graph of the data from the last month, they are both on the rise. (The gaps in DJI are the weekends). However, BTC got back to $7336 on the 6th of April, with a 51.9% re-increase. Yet, The Dow Jones Industrial has only seen a  27.585% re-increase on its bottom by the same date. The issue with looking at the data like this is that the DJI is eleven days behind BTC with the time it got to the lowest point during COVID-19.

So, all we can do at this point is to see what sort of rising they have both made in the time that they have had after the dip. It has now been seventeen full days since the lowest point of the DJI, so we will take that timeframe and see how they both compare 17 days after.

Now that we are looking at a simple graph of the first seventeen days post the lowest point. The Dow Jones Industrial has a much better prospect of gaining back its pre-COVID-19 prices.

While there is no concrete evidence here that either is better than the other for immediate investment, you can look back over the data and make a few assumptions. Bitcoin has always been a market of high volatility, and it probably always will be. Whereas, the Dow Jones Industrial is a lot more stable. Therefore, I believe, looking at the trends of both markets, they will both rise to where they have been in the past. However, one will do that with a more linear progression, and the other a lot more sporadic.

So, the real question is not, which should you invest in, but more; which market style do you like more? If you want to have a more defined, steady increase in your capital, I would pick stocks. However, who knows what could happen with the price of crypto on the other side of the pandemic? Perhaps, as more people are at home now, they will invest more in crypto. We may even see another peak like that seen in 2017. 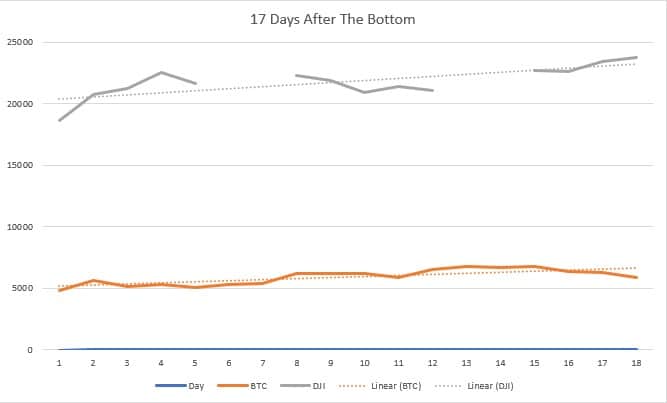 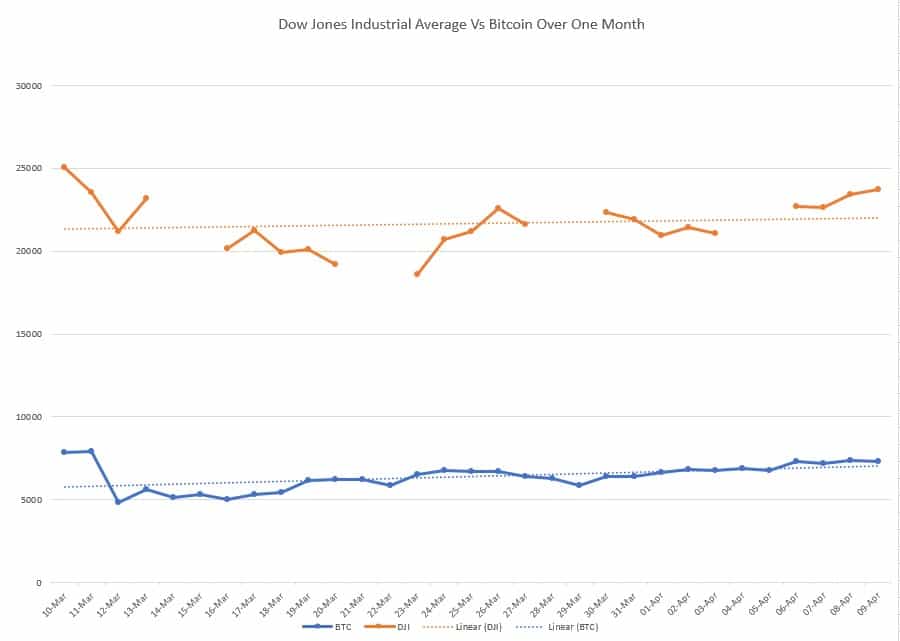 How to Invest in Hashgraph?